Sometimes 26 letters are not enough. Dr. Seuss fans will know what I’m talking about.

Anyone who writes seriously at all, I’m guessing, is frequently frustrated by the inadequacy of language to express the full range of things there are to express in the world. There aren’t words for everything. There aren’t even combinations of words for everything, although one of the things that great writers (and sometimes even we lesser writers) do is find new combinations of words to express things that haven’t been expressed before, or that have been expressed before but are in need of refreshing.

On my journeys around the Haikuverse that’s chiefly, I believe, what I’m looking for — people saying things in ways that are new, or new to me. I read a lot, I always have, so it’s not that easy for me to find words I haven’t found before. But it happens, still, many times each month. It’s one reason to keep going. There are others, but I keep coming back to words. I think language, for me, might occupy roughly the same space in my brain that religious awe occupies in the minds of many. We are endlessly finding new things to describe and inventing new ways of describing old things, as individuals, as a species; this seems like reason enough to believe in some form of eternity. Thanks to everyone who’s given me some reason to believe this month.

Slime trail—
glancing back at
the glinting

(Also, you should read this lengthy interview with Don from Christien Gholson’s blog.)

dusk at the beach
a stone and I
touch each other

a winter bee
continues to walk
without a place to die

dark
the TV ignores
everything

cave mouth
a scream beyond my range
of hearing

Another grey day has fallen as a pall on the new calendar as if what makes a difference really doesn’t. Only the ticking clock and the distant squawking of a crow or better yet, complaint, as well as the deep sigh of engines passing by tell the trudge goes on. I look on the cypress with a creeping sense of sorrow. The deep cold has darkened its twigs.  Gifts piled beside it now holiday debris. A black garbage bag rests folded in the bin. I gather the cards. The wishes slide off my fingers. A bag of pebbles waits to be planted on the vase. Like wishes that might take root, I would have to water them each day. But for now

blue notes waver under the lamp

No, It’s Not Japanese Short-Form Poetry, But It’s My Blog And I Can Do Whatever I Want

I move
close to a heater

By god
I hear
a rooster

I had
only heard
a rooster

In the movies
before

To think
of the beautiful things

Your memory
has led me
into

Gene Myers, the blogger over at The Haiku Foundation, asked a bunch of poets in December what their hopes were for English-language haiku in 2012. One of my favorite answers to this question, part of which I’ve quoted below, came from Scott Metz:

“One of my hopes is that the aesthetics and techniques—the poetics—that have become traditional (classical?), and entrenched, in English-language haiku (with all its wonderful and creative misreadings, limitations, misinterpretations and ahistorical stances) continue to flourish and intensify, and deepen. With an emphasis on transparency (and directness) of language, simplicity, plainness, literalism, direct experience, season words, and ‘ordinary reality,’ a remarkable, timeless foundation has been created.

“Another one of my hopes for English-language haiku is that it will continue to diversify and evolve; that poets will continue to play (the hai in haiku) artistically (with language, modi operandi, imagery, structure, culture, media, history, literature), go where they need to go—go where they must go—and continue to question and resist. …

“I look forward to the craft and artistry and invitations in everyone’s poems: all the doors and windows left open and/or cracked, all the lights on in the attics, all the latches and locks left undone. I hope for more of all of it and thank everyone for sharing it.”

— Scott Metz, Hopes for English-Language Haiku in the New Year

Alan Pizzarelli and Donna Beaver, the team behind the haiku-podcast goodness of Haiku Chronicles, have once again teamed up with the astounding Anita Virgil to produce something amazing: a video exploration of the many dimensions of modern English-language haiga, narrated by Anita and set to music. You need to spend half an hour watching this: Haiga Gallery.

Contact Chris Gordon at mrcr3w@yahoo.com for a copy of the most recent issue of his intermittently-published and mind-altering journal, featuring the poetry of the great Jack Galmitz. [Apologies to Jack for leaving his credit off the original version of this post. All I can say is, I need new glasses.] I highly recommend the ant ant ant ant ant blog too.

just how
to hold you
paper kite

Amongst the usual THN goodness in the most recent issue was this haiku? senryu? which was discussed at length at the most recent meeting of (one of) the real-life haiku groups I attend, during a session on senryu led by the great Bill Pauly. The author, Dan, a wonderful person and poet, is a member of our group — he drives two hours each way to join us every month, which makes us all feel very lucky. This poem of his is so light and deft and well-constructed that it reminds me of a paper kite; I keep expecting it to lift into the air any minute.

pinwheel —
as if a second thought
starts to turn it

One day in December when I was feeling very gloomy Peter Newton’s new book showed up in my mail, with a cover illustrated by Kuniharu Shimizu and an interior designed (oh, and written, of course) by Peter, with the kind of attention to detail that one normally associates with the finer still-lifes of the Flemish Old Masters. Or, you know, something like that. What I’m trying to say, in my usual pretentious way, is that this book is a lot of fun to hold. And page through. And look at. And read. Plus, there aren’t enough orange books in the world. 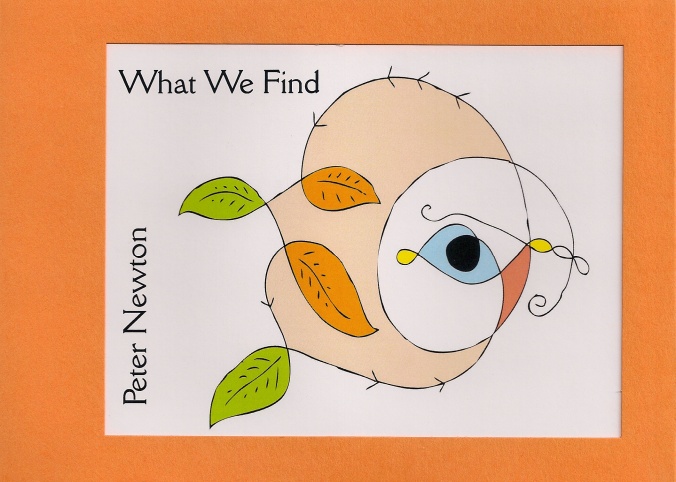 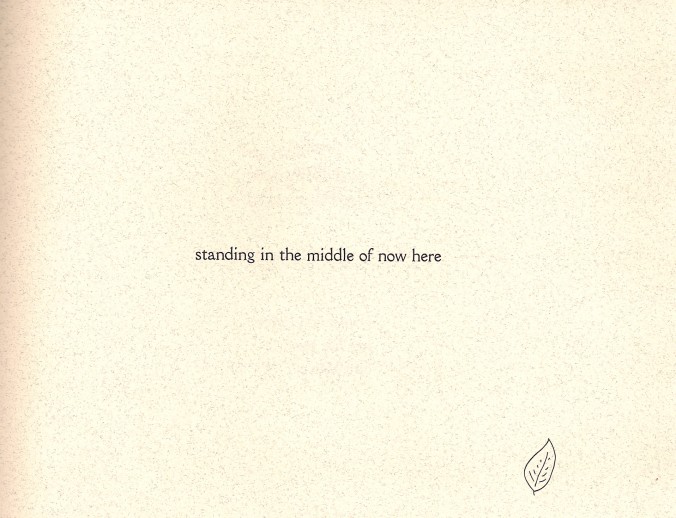 a bouquet
of my least favorite flowers
first love

Sunday service
between hymns
tuning out

air guitar —
nothing for sale at
the empty mall

after the bomb
two swallows fledge
in the empty mall

every
face
in
the
empty mall

the empty mall
promises nothing
for everyone

zombies speculate
about their origins
in the empty mall

every storefront
in the empty mall —
a mouth

empty mall —
I take the pills
I promised to take

everyone arriving
at the empty mall
gets an empty balloon

further into
the empty mall
than I ever meant to go

a glass case
with a heartbeat
at the empty mall

sunrise
burns a hole in the wall —
empty mall

empty mall
so many
molecules

empty mall —
a herd of nameless animals
in housewares

empty mall —
having our souls inspected
in the fountain

the stars I see
and the stars
themselves
your voice a few feet away
in the darkness
.

American Tanka 20: A Few Feet Away

west wind
the rain arrives
without you

blackbirds on the moon…
the frustration
of wings 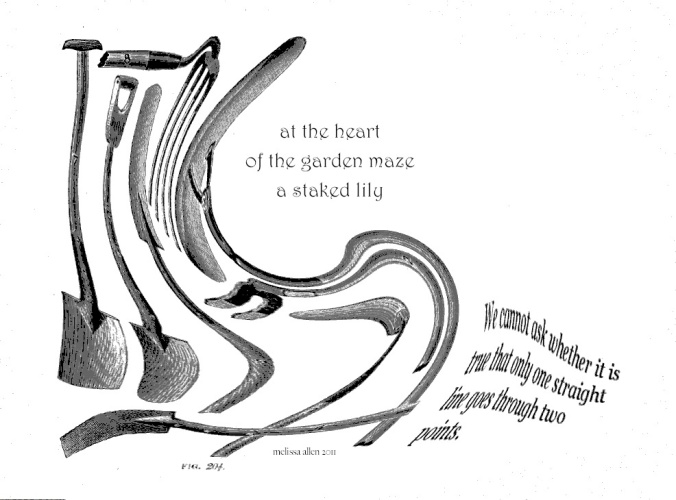 at the heart
of the garden maze
a staked lily

first dream of the year
everything forgotten
before it begins

Before I even get to the party everyone there knows I’m getting divorced, so I don’t have to tell anyone or pretend to be happier or saner than I actually am. This is what gossip is good for, I think, drinking my third glass of wine. I don’t think I’ve ever had a third glass of wine in my life. Someone tells me, “All change is for the better.” Yes, yes, I think, sipping wine and eyeing the chocolate, tell it to the dinosaurs.

New Year’s bonfire
stories of what we lost
this year

Things change. And I don’t like that. I cling to the driftwood of sameness until it’s carried me so far out to sea I’ve forgotten where I came from and where I wanted to go, until the wood disintegrates and I’m left holding only splinters. And then, forced to let go and swim, I flail the way an inexperienced swimmer flails in the cold waves of the sea, not knowing that letting the wave wash over you — carry you — expends less energy and is less likely to get you drowned.

One of my resolutions for 2012 is to let those variable waves carry me and see where I get. I suspect I’ll spend some time in the deep ocean, cold and frightened, not sure how to get back. Treading water might be the best I can do for a while. But inevitably, the tide turns; salt water is easy to float in; and it seems likely that I’ll make it back eventually to some kind of solid land. Maybe not the same land I started out from. Maybe a better land, maybe worse; almost certainly survivable. And there will be poetry there and there will be friends. Possibly there will even be extended, strained metaphors. You never know.

Happy New Year, friends. And thank you for everything.