Today, I turned around , but where you are ? I run , I call sign , but I forgot, you are angels can fly !Raindrops getting bigger and shoved deep breath , the clear , cool .

15 years, what has changed, then buy tea girl does not know what to do , maybe , she became a boss , maybe she was in other places sell tea , she should also be changed, not to mention all sour tea Huangshan of it .

I drove out a couple hours west over the weekend and located the Mississippi River. It was right where I left it, several years ago. I shouldn’t leave it so long between visits but I keep forgetting I live so close to the Mississippi now. I grew up on the East Coast and out there the Mississippi seems more or less legendary, like Paul Bunyan, who coincidentally sprang up near its source.

I was happy to stand on a bluff above the Mississippi and watch it make its way legendarily through America, splitting the country from stem to stern like a powerful woman with an axe. It made me feel powerful by association, although that of course was an illusion. I was no more or less powerful than usual standing on that bluff. But it seemed more possible there, somehow, to feel like something with a source and a current. Cutting my way unapologetically through the earth. Heading for the sea.

back in the river we deepen it

of to the sea we tell the story

undertow to tell the truth

snowdrops
I look up the word
“blastocyst”

transported the syntax in a honeycomb

Yeah, I know, I changed the blog. I was getting bored, as I so often do. I mean, no I don’t. That is, I get bored on a micro level, but not on a macro level. I get bored with individual things, but never globally bored. I still don’t really understand the concept of being generally bored, like with life. Whaddaya mean there’s nothing to do? There’s a whole uni-bloody-verse out there, people. Explore it.

This public service message brought to you by your sanctimonious, less-bored-than-thou Aunt Melissa. You’re welcome.

finally writing it out of the flower

melting snow
I change my ring tone
to something faster

These days this blog is basically my playground. I think I used to have much more of a sense of trying to impress people or please them when I wrote here. Or maybe I didn’t? I don’t really remember anymore. But I know that lately this idea of the blog as my playground has been very strong in my mind. For a while it felt like a burden, like a chore I had to do. Maybe it just got to be that way after a while. Now it’s like, oh, I get to write some stuff! I get to write whatever I want! Whatever crazy thing comes into my head! And it really doesn’t matter if anyone likes it! Because blogs are free and no one has to read anything they don’t want to and even if no one reads it at all, I’m having a great time!

No, I’m not trying to say these haiku are especially crazy. They’re pretty conventional. They’re a little dull, to me. They’re what I felt like writing tonight.

I think tomorrow I’ll feel like writing something completely different.

Addendum, 4/5/14: Okay, I just discovered this. I really have to read my blog more often. Apparently I don’t have an original thought in my head.

I suspected that mustering haiku poets to write lots of polar vortex poems would act as a kind of voodoo spell to chase the polar vortex away and it looks like I was right, because the temperature has actually been above freezing here for several days in a row and I’m not sure that’s happened since early December. Of course, we’re well into March now so I suppose it’s just barely conceivable that it would have warmed up eventually anyway, but I’m going with the “breath of poetic fire” theory. I hope it’s warmer where you are, too, or cooler, or wetter, or dryer, or whatever condition is most desirable meteorologically wherever you reside.  Thanks to all who contributed for helping out!

martini–
I make my own
polar vortex
.
the snow hollow
surrounding an evergreen;
polar vortex

Polar vortex even a whisper is too loud.

the polar vortex
nanoneedles my tattoo
of the wind

polar vortex
sliding through
the roundabout

your look
as i take the last slice
polar vortex

me and you
coexisting warmth and cold
polar vortex

polar vortex —
I forget that I forgot to
rake the leaves

polar vortex —
the neighbor’s pond freezes
for the first time

antimatter–
lost in a polar
vortex

I keep thinking about poetry being an agent of transformation. One is a different person—one’s life is changed—after reading a poem. Even a bad poem, full of clichés and dud line breaks and flat diction. One looks up from such a poem and is surprised to be free after that little imprisonment. That’s a transformation of a sort. But a fine poem, a poem that immediately permeates one’s being, a poem which, after being read, makes the reader look around and suddenly need to reassess the room, the world—that’s why those of us who read poetry read poetry. As for those of us who write poetry—once, just once, we say to ourselves, let me write one of those world-shifters. Let me be someone’s “suddenly I see” or “oh, that’s name of that squiggly feeling I have always felt” or “so now I need to relearn how to breathe.”

polar vortex
I make my husband drive me
to the shore

this polar vortex
a towel snap to my solar
plexus

polar vortex
too numb for color
on the maps

a lowing in me polar vortex

polar vortex
his voice cracks
for the first time

What am I doing lately? What, you mean besides calling in sick to work (because I was sick, don’t get any ideas) and sitting on my couch watching endless episodes of sitcoms on Netflix? Yeah, I wish I could say that I spend all my time engaged in high-toned cultural activities and churning out creative works, but no. Sometimes I like to rot my brain like everyone else. It’s the American way.

However, I did get a package in the mail lately from an Internet retailer that doesn’t need any more free advertising, containing these books, so they’ll probably be getting a look-in soon (you know, as soon as I’m done with the pressing task of finishing the first season of “How I Met Your Mother”): 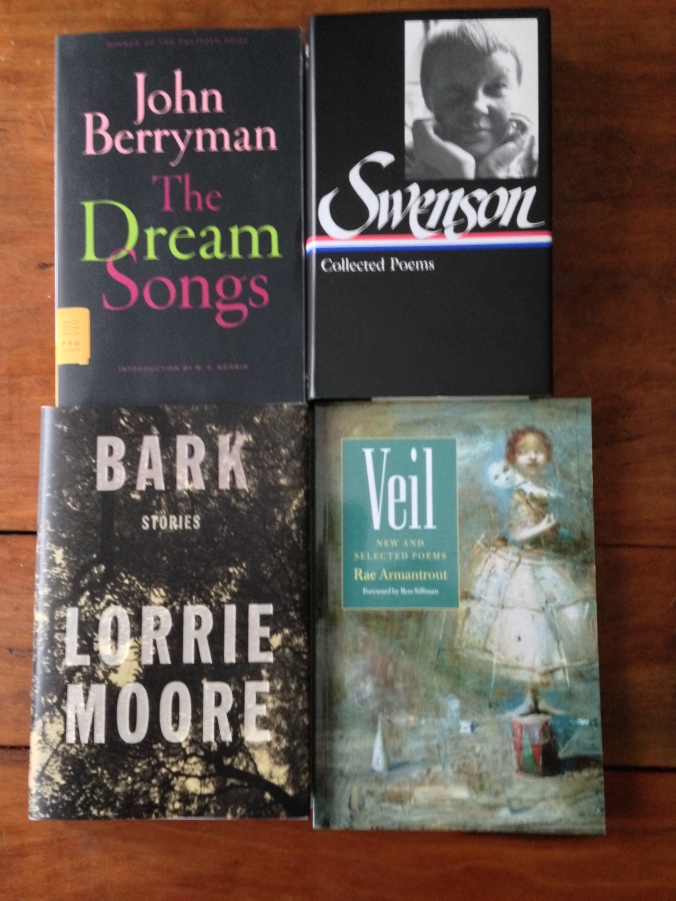 And also I’ve been enjoying viewing and contributing to Aubrie Cox’s annual Doodleku festival over at Yay Words!, this year in glorious color.

And also also I had a longer poem from one of my recent posts published over at Red Wolf Journal, whose current issue is concerned with “The Art of Habitation.”

And also, also, also, the latest issue of Haibun Today features a very thoughtful and insightful commentary by Rich Youmans on my haibun “The Shape of Water.” I think it’s quite likely that Rich understands this haibun better than I do, which doesn’t surprise me at all — sometimes I wonder if I have the faintest idea what I’m doing when I write. (This issue of HT also features a lot of great haibun by people who are not me, because I need to get cracking.)

I’ll be back tomorrow with your polar vortex poems. I’m pleased to report that writing poetry about it seems to have driven the polar vortex away and I’m hoping that this time it will stay in the actual polar region. 41 degrees today! I went out today without a coat (please, who needs a coat when it’s above freezing?) and tried to chip some of the ice off my driveway, but winter laughed at me. There’s like three inches of ice, it’s not going anywhere until actual spring arrives, wearing a jaunty hat and promising to stay forever. The lying tramp.

late winter
I redecorate
my mind

In the bare branches of the lilac, clusters of oak leaves are lodged like lost mittens.

a snowy morning arranging for its own meaning

A ton of people have sent me polar vortex poems so far, which is great because it’s still so cold here that poetry is basically the only thing keeping me sane. You can send me any you’ve got till tomorrow morning. I’ll post them over the weekend.

frosted windows
once again I’m wrong
about everything

This guy keeps texting me pictures of himself with the Dalai Lama. For years he’s been making the arrangements for the Dalai Lama’s visits to our city, and at this point he has the logistics down cold. Or pretty cold. It can be complicated. You have to have a big enough van, first of all, to pick up the Dalai Lama’s entourage and all their luggage from the airport. You have to arrange for the limos and the police escort to take the Dalai Lama swiftly through the city streets to his speaking engagement. The Dalai Lama has a security detail, of course; well, he’s a world leader, more or less. You have to go through a background check, State Department, heavy-duty, to get the clearance to take care of things for the Dalai Lama this way. Having this responsibility is exciting, yes, but not exactly a party. If you don’t get all these details right it could be very embarrassing, maybe even dangerous — for both the Dalai Lama and everyone around him — so for a couple of weeks, before and during the Dalai Lama’s visit, this guy doesn’t get much sleep. There are so many things to arrange and so many things to worry about. The guy doesn’t really have time to talk or hang out. Just text, apparently.

my ego in spite of the rain

The Dalai Lama, you’ll be interested to know, is exactly the same close up as he seems from a distance. This is what the guy tells me, anyway. I try to think of how the Dalai Lama seems from a distance. Orange and smiling, mostly. And yes, the guy’s right: that’s how the Dalai Lama looks in the closeup photos the guy texts me. Keeps texting me. “He’s very genuine and compassionate. You know. Just like you imagine,” the guy said to me, the first time we met. I didn’t tell him that I’d never imagined the Dalai Lama. I’m not sure the guy would believe me.

apropos of nothing its wings

I did think vaguely of becoming a Buddhist at one point. I read some books, did some meditating. I looked up Buddhist groups in our city to see when they held meetings, but I never actually went to any of the meetings. This Japanese poetry I write, a lot of the other people who write it are Buddhists, or at least think about Buddhism a lot. I’m constitutionally irreligious but Buddhism seems pretty irreligious, for a religion. I thought it might be a sort of compromise between the fundamentalist Christianity I was raised with and the nothing I currently practice. In the end I guess I was defeated, as I so often am, by the fact that it’s almost impossible for me to believe in invisible things. I think I consider this more a flaw in myself than a flaw in religion but I’ve gradually learned that to be true to myself I have to accept even my flaws. I think I might have read that in one of the Buddhist books.

just barely a path regretting it