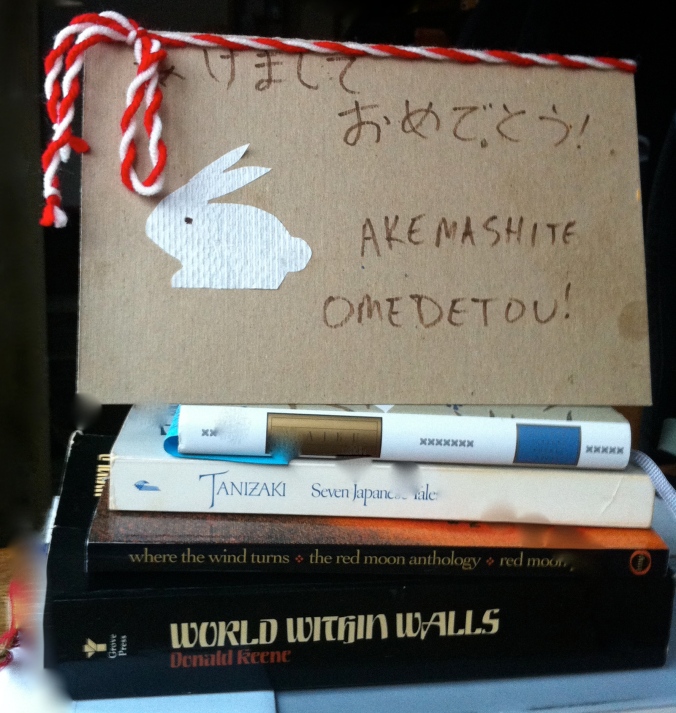 “Happy New Year” in Japanese, as illustrated by a couple of lovely women at the folk-traditions festival I just spent several days at. Those books it’s sitting on are all the haiku- and Japanese-literature-related books I am currently reading. I highly recommend all of them.

So a couple of weeks ago I offered to give one of you a present. And all you had to do in return was cut off the pinky finger on your right hand and mail it to me … wait, was that not your understanding of the deal? Oh, okay, all you really had to do was comment on the blog sometime between then and yesterday, and then hope you got lucky in the present lottery.

This is how the present lottery worked: I made a list of everyone who commented in the appropriate time period, numbered them in the order they commented, and then went to look for the teenager. I found him in his mad-scientist lab in the basement, crouched over a computer hooked up to a number of unidentifiable electronic parts, typing gobbledygook into a little window. (He does this kind of thing a lot. I’m always a little afraid that someday the Interwebs will explode and I’ll find out it was his fault.)

I said to him, “Hey, quit typing your gobbledygook and make me a random-number generator to pick a random number between 1 and 18. Because that’s how many people commented on my blog and I have to give one of them a present and I want this to be a completely scientific, unbiased process.”

He gave me a strange look, but obediently (he is a good boy, really, despite the exploding Interwebs), he opened another little window, typed some different gobbledygook, Googled some stuff real quick, typed more gobbledygook, and then said, “Four.” I am trusting that he did actually create a random number generator and didn’t just pick a number out of his head to make me go away. But whatever, four it is.

And the winner is … Alegria Imperial, whose wonderful blog jornales you must all go take a look at right now. Her New Year haiku there is great — it features a rabbit stole, which I love because I have never read another haiku about a rabbit stole. Also it is a refreshing variation on all the other New Year rabbit haiku floating around out there right now. (2011 is the Year of the Rabbit, in case you had somehow managed not to find this out despite the fact that every single haiku poet in the universe has written a New Year’s haiku with a rabbit reference in it in the last week. I’m not saying this is a bad thing. You can never have too many haiku about rabbits, as far as I’m concerned. I’m just jealous because I haven’t been able to write a good one yet myself.)

So the present, as I mentioned in my original post, is a copy of Yasunari Kawabata’s Snow Country, which I completely-on-purpose-but-utterly-foolishly purchased a copy of at a used bookstore even though I already own one. The really great thing is that, as she mentioned in her comment, Alegria already owns one too! But it’s one of her favorite books and it’s beginning to get a little decrepit, and she was wanting another copy. So off it goes to sit on the shelf next to its brother. (Email me your snail mail address, Alegria!)

By an amazing coincidence, on Christmas Day Kuniharu Shimizu, at his fantastic haiga site see haiku here, wrote a post featuring a haiga inspired by Snow Country, along with a brief commentary. (I really recommend you visit his site to see the wonderful photo that accompanies the haiku.)

“I can almost hear someone in the car yelling, ” Hey, close the window, shut the cold wind out”.
This photo reminded me of Kawabata, Yasunari’s “Snow Country”. The haiku got a hint from the first sentence of the novel.

When I had chance to visit the same snow country, which is in Niigata, I took Jyoetsu Shinkan-sen train. It is the super express train with fixed window so nobody cannot open it. When a long tunnel ended, snow covered fields and mountains of Echigo-Yuzawa sprawled before my eyes. It was so nice to view such a pristine landscape from the warm and comfortable seat of the train.

And it’s been so nice over the last eight months to view the landscape of the haiku world from the warm and comfortable seat of this blog, surrounded by so many wonderful traveling companions. I wish I could send you all presents. But I’ll give you what I can: My deepest gratitude to all of you for reading, writing back, and sharing your lives and thoughts and writing with me. I wish you all the happiest of New Years.

wondering
if I ever thanked you
narcissus bloom

(originally posted on the Facebook page of The Haiku Foundation, in response to a call for Thanksgiving haiku)

So thank you. Yes, you. The one reading this post. You could be doing something else, like basting your turkey or watching the game (don’t ask me what game, I don’t pay attention to that stuff). Instead you’re here, paying attention to my words. That’s pretty amazing to me. That is a gift that I don’t take lightly. So thanks, again. And have a wonderful Thanksgiving.