evening wind
a cicada shell rattles
on our doorstep

*
Wow … this feels incredibly traditional for me. I mean, I think it’s reasonably successful as a haiku, if a little boring, but it makes me a little nervous because it’s so … haiku-ish. Is that weird?

I don’t think I quite realized until now how much I try to avoid writing what is the “traditional” English-language type of haiku with only nature imagery and nicely balanced lines and seasonal indicators and all that jazz. I tend to like better, and to write, haiku with something a little more … unexpected about them. Or maybe I just mean haiku that are a little more … authentic, or contemporary, than this. I don’t say I necessarily succeed, just that that’s what I’m aiming for. (Insofar as I’m able to articulate what I mean at this time of the morning, in a state of sleep deprivation.)

I think maybe the reason the nature-imagery thing seems so stilted and played out now is that, as a society, we’re pretty far removed from nature; for most of us, a manufactured environment and human technologies are more prominent in our daily lives than the rhythms of seasons and weather and plant and animal life cycles.

So, unless we’re naturalists or dedicated country dwellers who spend most of the day outdoors, it does feel kind of fake to be constantly writing about birdsong and drifting clouds and rustling leaves, at least without some kind of human context to put these things in what is their proper place for most of us — concerns secondary to whether the furnace or air conditioner is doing its job, or how many emails we got this morning, or how the traffic is aiding or impeding us in our daily journeys.

Lots of people have the same concerns as I do, of course, and there is lots and lots of great haiku being written now that does feel real and contemporary and still respects the haiku idea of placing the writer (and reader) in a specific time and place and making a very specific observation or two. I must say that I often have the same sense of anxiety about haiku that don’t mention nature at all, maybe because I do respect the power of haiku to force us to regard ourselves as what we properly are, which is part of nature, despite how thoroughly unnatural most of our surroundings are these days.

I really like the tension (not just in haiku but really in all art, literature and painting and photography and even architecture) between the natural and the human-made. I remember seeing a series of photographs at an exhibition several years ago of what were very clearly human artifacts, often in brilliant unnatural colors, placed in more muted natural surroundings — the effect, to me, was to highlight the beauty and interest of both object and setting.

Another time, our local botanical garden hosted an amazing art installation of long chains of large round scavenged things (like bowling balls and weathered plastic Halloween pumpkins and giant ball bearings) hung from very tall trees — like tree jewelry, I suppose. I could have stared at those things all day; they seemed so completely in harmony with their surroundings despite being so very artificial. [New! Pictures!] 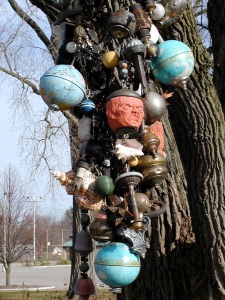 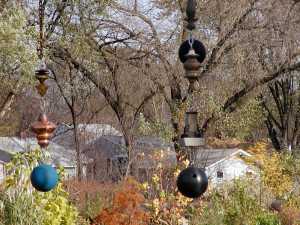 And really, that is a very Japanese aesthetic too — the art of mingling the human with the natural in such a way that both are enhanced. Think of a Japanese garden with its neatly raked stone beds and small water bridges and carefully planned views of carefully arranged plantings (and if you’ve never been to a good Japanese garden, you should go to one, preferably today), or a traditional Japanese house with its natural materials and minimal furniture and openness to the elements.  [And more pictures!]

I think that that same aesthetic is or properly should be at work in haiku — the tension or perhaps, the reconciling of tension between the works of human beings and their natural environments. When I imagine a classical haiku poet I see him sitting in a house or just outside one, or walking through a village or riding a boat down a river, looking around him with a gimlet eye at everything in his surroundings — the plants and animals and earth and sky and people and buildings and tools and vehicles — and connecting a couple of those elements in his mind, without particular regard to whether they were “natural” or not.

So maybe that should be our ideal, as haiku poets. Really being wherever we are, and seeing whatever we see, and being aware, yes, of the weather and what the sky looks like and whatever is blooming or singing within our purview, but also mindful of the indoor weather, of the smells and textures of the things we have bought and handle every day, of the moods and wardrobe and habits and speech of our fellow human beings. And making of, or seeing, something real in all that stew.

Cicada shells do rattle, on doorsteps and sidewalks and driveways, in the autumn — much more resonantly on those artificially hard surfaces, I imagine, than they would rattle in a loamy forest or on a mountain path — and the sound is both chilling, like the autumn wind, and oddly comforting, especially to those of us who live in houses and can shelter there from the elements, unlike the poor departed cicadas …