thanks to Shan Thomas.
as always, click to enlarge.

I started out the day spinning my car into a ditch before dawn. When it was spinning I didn’t know where it was going, only that I wasn’t in control of it. There might have been a tree waiting for me, or another car, or a cliff. It was too dark to tell.

I felt a deep terror and curiosity. And later, as my car was being winched by the tow truck back up the slope to the road with me at the wheel, as if to begin the whole roller-coaster ride over again: joy.

The events in this haibun didn’t happen this morning, or any morning recently. I’d actually forgotten I’d written this, but I rediscovered it when I conducted a search of my email today for any mention of or correspondence with Martin Lucas.

Martin was the erstwhile editor of the great British haiku journal Presence; he was a very fine haiku poet, and the author of one of the most influential essays of the last decade about writing haiku: “Haiku as Poetic Spell.” He had a keen analytical mind and was one of the few people in the Western world to have received a doctorate for studying haiku. He was a kind man and a good editor; when I sent work to Martin I knew I could count on him to say something insightful about it, whether or not he chose to publish it. I say “was” because–as many of you know by now–Martin disappeared from his home in Preston, England a few weeks ago, and his body was found on a beach nearby yesterday. He was 51.

I rediscovered my haibun above when I searched my email for Martin’s name, because a couple of years ago when I wrote it, I accidentally sent it to Martin instead of to the friend with a similar name I’d meant to send it to. He must have thought this very strange–we weren’t so close that I’d ever have deliberately just sent him off a fairly personal haibun with no other explanation. But he didn’t question me about it or express confusion, just sent me back a kind, concerned message about what a frightening experience this must have been, and told me a similar anecdote about a coworker.

Martin was one of those people I always carelessly assumed I’d get to know better some day, perhaps when I (some day) made it over to the U.K., or he (some day) came to visit the U.S. He occupied a small but not insignificant place in my brain, because he’d done so much to form my haiku poetics and I admired his work in so many areas. As people do, I feel an obscure sense of irrational guilt now that he’s gone: that I didn’t make more of an effort to get to know him, and that I couldn’t, so to speak, keep his car from going out of control on the ice.

That’s what I mean by Poetic Spell. Words that chime; words that beat; words that flow. And once you’ve truly heard it, you won’t forget it, because the words have power. They are not dead and scribbled on a page, they are spoken like a charm; and they aren’t read, they’re heard. This is what I want from haiku: something primitive; something rare; something essential; not some tired iteration of patterns so familiar most of us can produce them in our sleep. It’s not the information content that counts, it’s the way that information is formed, cooked and combined. Poetic spells don’t tell us anything, they are something, they exist as objects of fascination in their own right. You can hold them in the light and turn them about and watch each of their facets gleam. They begin and end each reader’s unique reflection.

melting snow
I change my ring tone
to something faster

These days this blog is basically my playground. I think I used to have much more of a sense of trying to impress people or please them when I wrote here. Or maybe I didn’t? I don’t really remember anymore. But I know that lately this idea of the blog as my playground has been very strong in my mind. For a while it felt like a burden, like a chore I had to do. Maybe it just got to be that way after a while. Now it’s like, oh, I get to write some stuff! I get to write whatever I want! Whatever crazy thing comes into my head! And it really doesn’t matter if anyone likes it! Because blogs are free and no one has to read anything they don’t want to and even if no one reads it at all, I’m having a great time!

No, I’m not trying to say these haiku are especially crazy. They’re pretty conventional. They’re a little dull, to me. They’re what I felt like writing tonight.

I think tomorrow I’ll feel like writing something completely different.

Addendum, 4/5/14: Okay, I just discovered this. I really have to read my blog more often. Apparently I don’t have an original thought in my head.

shooting my way out of myself into winter

winter inside every square in the grid

back to placing bets
on myself
winter sunrise

A few months ago I took down from a high shelf the works of the ancient Roman poet Horace, which I read in high school Latin class. Inside were still folded-up sheets of lined paper with my translations of some of Horace’s odes written neatly on them in my best high-school handwriting. The first one, which was always my favorite, even before I had any real understanding of what it meant, began, “Alas, how the years fly…”. Yes, so they do.

These are poems with a very definite meter, which rely heavily on sound for their effect. So I read them aloud. And then again, a few more times, because sometimes I’m in love with the sound of my own voice. They sounded great. I became a little bit jealous of Horace. For one thing, he didn’t have the Internet to distract him. For another, even if you don’t know Latin from Klingon, you can tell that this is some kickass poetry:

at least, if you have ears you can; and you might even be able to guess that it has something to do with waves and wind and cold and sickness and death and gut-cracking fear. The gist of it, which is highly relevant to all of us in North America this winter, is that it’s stupid to spend our lives terrified of all the crap nature throws at us when — not to put too fine a point on it — we’re all going to die anyway, somehow, some day. (In a later verse, Horace rubs it in by pointing out that after we die our descendants are going to drink up all the good wine we were saving. Moral [I guess?]: Drink more. Now.)

So Horace and I leave you with these uplifting thoughts. A, if you get worried this winter that if you spend five more minutes outside they’re going to find you frozen in a snowbank in the morning, just remember, worry is pointless–you’ll be waiting to cross the River Styx any day now anyway! B, while you’re waiting, you can take your teeth-gnashing agony and make a kickass poem out of it, or at least a small, unobtrusive poem that makes you feel a little bit better. You’re welcome.

first frost
between the moon and me
the angle of repose

Yeah, I know it’s been…approximately forever. There was a trip for work, and then a family vacation, and then a blizzard. Holy moly. Serious blizzard. With serious shoveling. Also, with the grad school and the work deadlines and… okay, I’m making excuses. But no one can be on all the time. I’m off right now. Off for a while. I’ll try to stop by a little more frequently for the rest of January though. I mean February. How do these months keep going by like this?

what do you mean, you can’t read my handwriting? oh, fine then.

black ice
the splinter tries
to work its way out
. 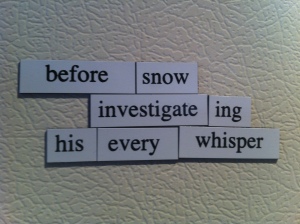 away from
the fire

with an
unknown
name

a winter
or two

before
the end
of the world

I find
more fog
to take your place

second snow
an angry wound
next to the scar

.
unzipping files
the dark larger
inside than out
. 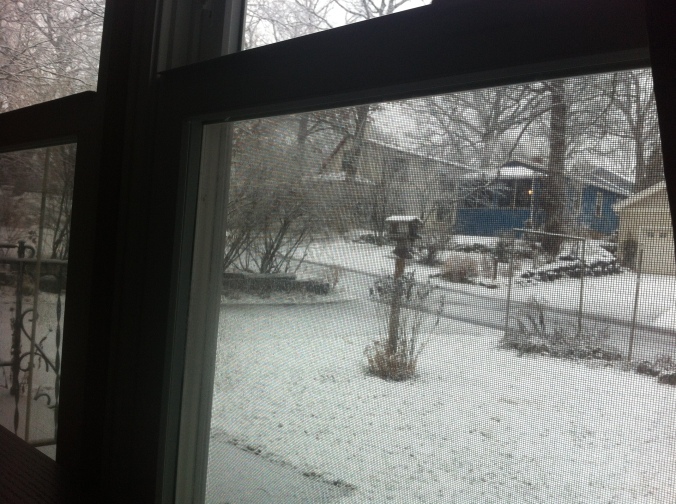 deep winter
they compare the size
of their rifles 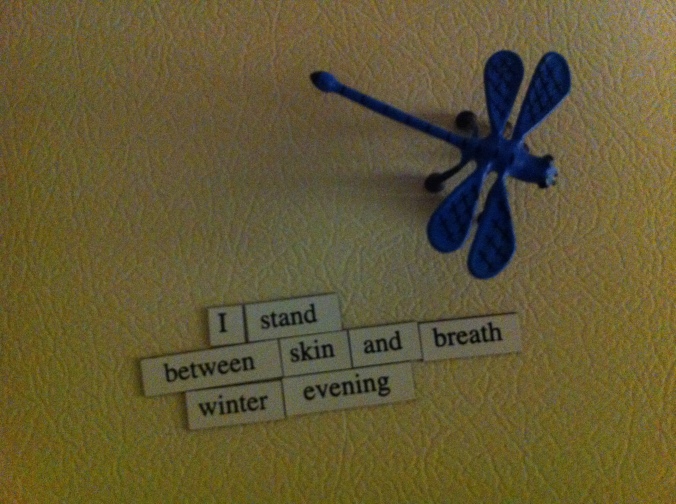 deep winter
teaching the fox
that he’s a fox

the smallest bone in my body breaks winter reeds

spring rain backwards until the beginning

forgot water could be so heavy winter rain

at the moon
for real